Globally, MSF has medical operations in approximately 70 countries and a national office in 21 countries

An Organization with Global Reach Powered by Local Support

In the fall of 2016, Karina Zavala, a soccer coach in St. John’s, Newfoundland, organized a soccer tournament to raise funds for Doctors Without Borders/Médecins Sans Frontières (MSF), in support of the work it does in countries such as Haiti, Syria and other places where the humanitarian medical needs are great. Karina’s efforts are indicative of the widespread, grassroots support MSF enjoys in Canada and around the world.

The movement dates back to 1968 when a group of young doctors decided to help victims of wars and major disasters and to create a movement of medical professionals who would speak out against the atrocities they would witness. Canadian medical volunteers created an MSF association in 1989, which formally joined the international movement in 1991. MSF was awarded the Nobel Peace Prize in 1999.

Certainly, the success MSF has around the world and its reputation for selfless volunteering and social impact is commensurate with the support it receives from fundraisers such as Karina. In 2016 alone, MSF received $55 million in donations from some 166,000 individual Canadian supporters. That speaks to the value that Canadians put on MSF’s lifesaving humanitarian work and the level of healing it brings to disparate communities in some of the world’s most war-torn and disaster-affected locales.

Going where help is needed

MSF operates in close to 70 different countries, in places where people have been made vulnerable by conflict, displacement and neglect. The organization seeks to alleviate suffering by providing emergency medical care to people at risk of injury, disease and death. MSF’s presence can provide a beacon of hope to those whose plight may otherwise remain unknown to the world at large, and its commitment to the principles of neutrality and impartiality means that its teams deliver care to those most in need, regardless of religious beliefs, cultural identities or political considerations. Despite the often overwhelming needs the organization encounters when responding to humanitarian crises in places like Syria, Yemen or northern Nigeria, MSF focuses on providing care to one patient at a time, guided by medical humanitarian values that see each individual life as worth saving.

Funds raised by MSF in Canada went directly to programs in 27 of the countries where MSF operates, as well as to the organization’s international search and rescue efforts in the Mediterranean Sea.

The same weekend that Karina was staging her fundraising tournament, MSF was busy on another island far to the south – Haiti, where the effects of Hurricane Matthew had once more wreaked havoc.

MSF has been active in Haiti since 1991. Its presence in the country demonstrates how thoroughly the organization embeds its capacity into local communities for sustained effect.

MSF operates six hospitals in the metropolitan area of Port-au-Prince: the Drouillard hospital burn unit, the Martissant 25 emergency centre, the Nap Kenbe emergency surgical hospital, the CRUO referral centre for obstetrical emergencies, the Pran Men’m clinic for survivors of sexual and gender-based violence, as well as the emergency and cholera response unit, which can be rapidly deployed.

" As our emergency medical programs are continuously adapting and evolving with changing contexts, we are deeply appreciative of Power Corporation’s support which provides MSF the flexibility to give medical care wherever it is needed most," explains Joe Belliveau, MSF Canada’s Executive Director.

“Médecins Sans Frontières has elevated humanitarian capabilities around the world with its unique approach to identifying needs and devising local solutions,” says Paul Genest, Senior Vice-President of Power Corporation. “As a company with international operations, we’re highly supportive of MSF, which seeks to improve the human condition in the most trying circumstances imaginable. They are an inspiration.”

Globally, MSF has medical operations in approximately 70 countries and a national office in 21 countries

See videos from Doctors Without Borders. 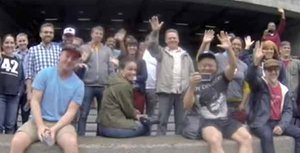