Each year, 23,000 nutritious meals are served to disadvantaged youth

During the pandemic, the Van was visited more than 15,000 times and the Bunker offered 1,500 overnight stays

A Philosophy of Dedication, Empathy and Respect

In 1988, Father Johns – or “Pops” as he is affectionately known – borrowed $10,000 and bought a second-hand van, taking to the streets to help youth who were homeless and vulnerable. Within weeks, he founded Le Bon Dieu dans la rue, which is now Quebec’s leading authority on youth homelessness.

Father Johns’ singular example of selflessness, respect and caring has inspired a team of trained professionals who today run the various services and programs operating under the Dans la rue banner. The street-level outreach to youth continues with the Van, which roams the downtown streets of Montréal five nights a week offering homeless young people hot food and drinks or plus personal items such as toiletries The Bunker provides temporary overnight shelter for homeless youth, between the ages of 12 to 21, with priority given to minors. The overriding goal of the Dans la rue team is to care for their immediate needs, provide a consistent source of support and help them acquire the skills and resources needed to lead more autonomous and rewarding lives.

“In recent years, I had the privilege of taking part in the first edition of Une nuit dans la rue, which aimed to make some fifty members of Montréal’s corporate community more familiar with the work of Dans la rue,” tells Pierre Piché, Vice-President of Power Corporation. “Thanks to that event, I was better able to understand the difficulties young homeless people face, as well as appreciate the impressive dedication and expertise of the Dans la rue team.”

Each year, 23,000 nutritious meals are served to disadvantaged youth

During the pandemic, the Van was visited more than 15,000 times and the Bunker offered 1,500 overnight stays

“
Dans la rue is extremely grateful for the support it receives from loyal partners like Power Corporation. It makes them feel a little less alone and it also provides them with hope.
”
Cécile Arbaud
Executive Director
Dans la rue 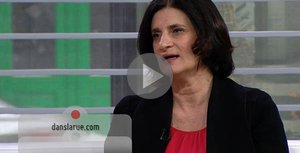