The Eenou-Eeyou communities are composed of 20,000 Eeyou and Eenou living in 10 coastal and inland communities in north-central Québec on a territory of approximately 400,000 km2

The Eenou-Eeyou Community Foundation (Cree Foundation) is a registered non-profit organization dedicated to the health, social development and prosperity of the Crees who have made their home in the James Bay region for some 7,000 years. Today, approximately 20,000 Crees live in ten communities spread across a territory of 400,000 square kilometers in north-central Québec, one-fifth of the province of Québec’s landmass. They call themselves Eeyou (coastal Crees) and Eenou (inland Crees), which simply means “the people”. Their territory is called Eeyou Istchee, which simply means “the land of the people”.

Cree communities have shown incredible resilience over the centuries. With the arrival of Europeans in the 1600s, the Cree gradually lost dominion over their lands, rights and resources.

The intervention of the Cree in the James Bay hydroelectric project in the mid-1970s was a watershed moment, however. Those discussions gave the Eenou and Eeyou greater control over their destiny and paved the way for future agreements that returned them to self-governance and strengthened their communities.

Since the historic James Bay Northern Quebec Agreement in 1975, the Crees of Eeyou Istchee have continued to progressively build independence and self-determination. Signed in 2002, the Paix des Braves marked a new era in relations between Quebec and the Crees, ensuring greater autonomy for the Crees and sparking beneficial economic development in Eeyou Istchee and the neighbouring regions. In early 2020 a new and far-reaching partnership, The Grand Alliance, set the framework for a unique collaboration between the Cree Nation and the Government of Quebec to carry out an ambitious plan to expand clean transportation and power infrastructure in northern Québec.

The communities manage their own education and health care systems and deliver culturally appropriate essential services across Eeyou Istchee. However, despite their successes, the Eenou and Eeyou still face many challenges not shared by communities in the southern parts of Canada. These needs are great and the issues facing the communities of Eeyou Istchee are pressing.

The Eenou-Eeyou Community Foundation, which is led by a Board of Directors of prominent Cree business, cultural, and government leaders, is dedicated to building partnerships with business, foundation and government sectors, while defining philanthropy with a lens that takes Cree values and traditions into account. The Foundation works with the Cree Nation Government and other Cree stakeholders to support major social and cultural development initiatives.

The Eenou-Eeyou Community Foundation has recently launched a $40 million inaugural fundraising campaign to finance a strong future for Cree children and youth by preserving and promoting the Cree culture and traditions, and developing healthy, strong and prosperous Cree communities in Eeyou Istchee. The Foundation will engage and inspire, helping to bring transformational improvements in housing, education, and health care, bringing greater prosperity and vitality to the people.

“The Eenou-Eeyou Community Foundation is an important tool for our people, mobilizing philanthropic support for our families, communities and institutions and opening up a path to important initiatives,” says Foundation President Tina Petawabano. “The Foundation is building a vibrant charitable sector in Eeyou Istchee, and giving our people an opportunity to engage in philanthropic activity.”

“For many centuries the Eenou-Eeyou communities lived upon the land with a philosophy of respect and a deep sense of stewardship. We can learn much from their perspective,” says Paul Desmarais, Jr., Chairman of Power Corporation. “We are pleased to support the Foundation’s breakthrough projects focused on youth.”

The Eenou-Eeyou communities are composed of 20,000 Eeyou and Eenou living in 10 coastal and inland communities in north-central Québec on a territory of approximately 400,000 km2

“
For many centuries the Eenou-Eeyou communities lived upon the land with a philosophy of respect and a deep sense of stewardship. We are pleased to support the Foundation’s breakthrough projects focused on youth.
”
Paul Desmarais, Jr.
Chairman
Power Corporation

See a video from the Fondation communautaire Eenou-Eeyou 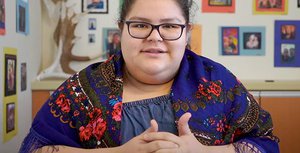